In 2002 as the number of rescue actions in the region got markedly increased in comparison with the preceding period, the company Archaia Brno o. p. s. began to pay more attention also to the archaeology of the royal city of Jihlava. A need for response to the increasing building activity in the region gave rise to an independent branch office operating in the Jihlava proper as well as at another locations within the Vysočina Region, namely on both sides of former land border. However, the field activities of the department have been lately facing as well the adjacent geographic areas, e. g. of the Dačice and Slavonice regions in former Jindřichův Hradec district in South Bohemia. Besides an enhanced efficiency of research activities from the preparation phase up to the processing of results and a closing outcome, the existence of this department enables a closer collaboration with professional as well as amateur public in the region, namely through the presentation of results of particular field actions, and by the raising prestige of our discipline. The basic activity of the Jihlava department is the rescue archaeological excavations on the area of medieval Jihlava and another towns in the region. To understand broader relations of the region’s colonisation and forming of the medieval settlement structure it is also inevitable to deal with the archaeology of rural and mining settlements as well as the mining areas and mines themselves.

Nowadays the department is trying to coordinate its own activity with that one of the other archaeological offices in the region (Museum of the Vysočina Region in Jihlava, Třebíč, Havlíčkův Brod and Pelhřimov) or of the District Museum in Jindřichův Hradec. It also strives after cooperation with the archaeology students coming from this region who want to work here after being graduated. In the future it will be thus possible to avoid the really imminent lack of professional manpower in the region. The main object of the Jihlava department is to establish a systematic rescue research concept for the territory of medieval Jihlava, and similarly also for another important medieval towns (e. g. Telč, Havlíčkův Brod, Pelhřimov, Humpolec etc.). It involves above all those towns the beginnings of which are related to the rise and fame of silver ore mining in the early 13th century. However, as emerged by the large-scale excavations at the Jihlava road bypass, many important deserted settlement structures occur completely outside any fortified town areas. With regard to the understanding of medieval settlement structure it is inevitable to gain information on any components forming a historical landscape (towns, townships, villages, fortified settlements, production and mining complexes, technical elements etc.). The department endeavours to investigate them by non-destructive methods within the limits of an advance preparation of rescue excavations at planned extensive landscape encroachments (e. g. construction of speedways and town bypasses). 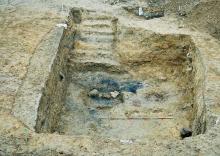 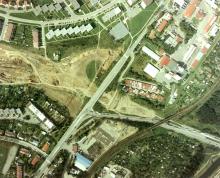 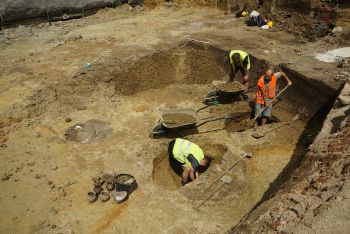