The work on the Internet -Encyclopaedia of the History of Brno enabled to broad public in May 2004 was opened by the Brno City Museum in 2001 already.

The encyclopaedia in form of interconnected entries collects data on significant persons and events that in some way affected the life of our town. In a simple manner you can search in the encyclopaedia e. g. for the medallion of the person, after which your street had been named, you can find out whether this person took part in some important event of the Brno town, whether some memorial tablet or monument of him is placed somewhere, or in which of the Brno cemeteries he is buried. Gradually also some “birth certificates” of the Brno houses will be available, i. e. the information on their history, inhabitants, architecture, artistic decoration etc.

Already from the very beginning of conceptual works on the elaboration of particular entries a work group arose consisting not only of the museum experts but also of the professional workers from another Brno institutions, above all of the Brno City Archive and the public benefit company ARCHAIA Brno. This work team is open to all the persons interested in the cooperation in the whole project, which is planned as a long-time one, aiming a continuous actualisation of the data already imported, and above all updating with newly acquired knowledge. The results of recent excavations will be thus as shortly as possible available to all the people interested in the history of Brno, who at the same time have the opportunity to fill up the empty spaces or rather windows of our history. In this manner we would like to gradually create a maximum exact memory of our town, which will be, in contrast to human memory, not darkened by age and thus it will be every time available to all those who are interested in the history of Brno. 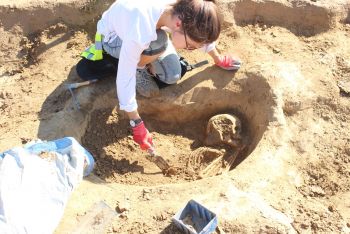