The Brno department of the company Archaia Brno o. p. s. continuously follows the activity of former local department of the Prague civil association Archaia established in 1997 through separation from the Institute of Archaeological Research and Preservation of Historical Monuments Brno (the employees David Merta, Marek Peška and Rudolf Procházka). From the beginning already the department was created by a skilled collective of archaeologists and several archaeology students (besides the above said employees also Jindřich Beroušek and Peter Kováčik) concerned with medieval and urban archaeology. The activities of the Brno department have been oriented all along on rescue archaeological excavations at medieval town cores in Moravia although some excavations were realized in Bohemia, too (Praha – Hostivař). However, the department focused all the time mainly on systematic rescue excavations on the territory of the Brno city and its historical suburbs. The Brno department of the civil association Archaia thus followed the activity of another institutions (Brno City Museum, Institute of Archaeological Research and Preservation of Historical Monuments Brno, Institute of Archaeology of the Academy of Sciences of the Czech Republic) that participated since the 1970s in important excavations on the area mentioned but none of them specialized in the research of Brno, until this branch office was established. Anyway, the majority of rescue archaeological excavations in the 1980s and the first half of the 1990s had been performed under the direction of Rudolf Procházka, in 1997 – 1999 the first head of the newly established Brno department of the civil association Archaia.

Nowadays the Brno department is a pillar of the whole company Archaia Brno o. p. s., and on the basis of a stipulation with the Academy of Sciences of the Czech Republic – Institute of Archaeology it acts as a guarantee of rescue archaeological excavations on the territory of the Brno historical town reserve which means in practice that the department is now carrying out any rescue excavations here. To a lesser degree it also continues to perform archaeological research of South-Moravian towns and townships (Ivančice, Modřice, Oslavany, Podivín, Tišnov, Velká Bíteš etc.). Today the Brno branch office is on a larger scale focused also on the documentation (building-historical research) of historical buildings in the Statutory City of Brno. Any rescue activity in Brno is submitted to the study of the urbanization process and history of medieval Brno that we take for one of the most important long-time tasks of the department’s professional team. Therefore it is inevitable to record through rescue excavations as many as possible field and building encroachments to the best documentation quality available.

Since 1997 the Brno department has been intensively cooperating with the Department of Technical Infrastructure at the Brno City Municipality on the project “Remediation of the Brno Underground” which has been in progress since the 1970s. The project goal is the detection, cleaning and securing of unknown underground spaces (usually cellars). Systematic designing and digging of inspection chambers on places that would be today only hardly accessible for any aimed research give us the possibility to document step by step the archaeological and building-historical situations in the whole historical core. Thus, we have the opportunity to gradually update the information on building coverage of medieval original plots and public spaces, to follow up the evolution of landscape relief, to identify any explored, unexplored and devastated area etc.


Thanks to systematic rescue excavations Brno became from the archaeological view one of the best-explored towns in Europe. The results of a long-time research completely changed the present picture of the town origin based so far mainly on the interpretation of written sources. Moreover, the archaeological finds in Brno are the only evidence of the town occupation in the 12th century. Comprehensive research of particular town plots yielded the essential knowledge of medieval building development and its basic principles, especially of the transition from the non-masonry (wood and earth) to masonry architecture at the turn of the 13th and 14th centuries. Upon the archaeological data acquired a whole range of partial topics can be studied, such as evolution of surface relief of the occupied area, settlement development of this space before the merge of the town, chronology of material culture from the town foundation up to modern times or the everyday life of a medieval and early post-medieval burgher. Some specific topics are treated by means of grant projects, in another ones particular workers are specialized.


The Brno department is also trying to convey its work results to the amateur public. We collaborate for example on the museum expositions of the Brno City Museum (Měnín Gate, Špilberk Castle, Minter’s cellar etc.), some smaller expositions we even realize by ourselves (New Town Hall, exhibitions in the Minter’s cellar etc.). Together with the collective of workers of the Brno City Museum we are taking part in the making of a historical Encyclopaedia of the Brno City. We also organize some topical lectures for the public (e. g. for the Mahen Library, Museum and Local History Society in Brno, Association of the Deaf, Lužánky Leisure Centre etc.). In the future we aim to publish a popular educational book about the medieval Brno. 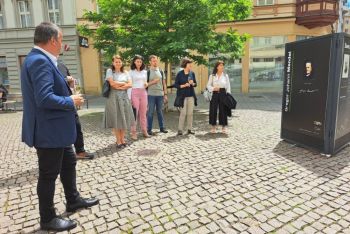